Skip to main content
NCR Market Controlled Access During COVID-19, March 12, 2020
Out of an abundance of caution and to help maintain the low threat level determined by the CDC for the DC, Maryland, Virginia (DMV) area, the National Capital Region Market, as of March 12, 2020, will institute additional safety measures.
Need Larger Text? 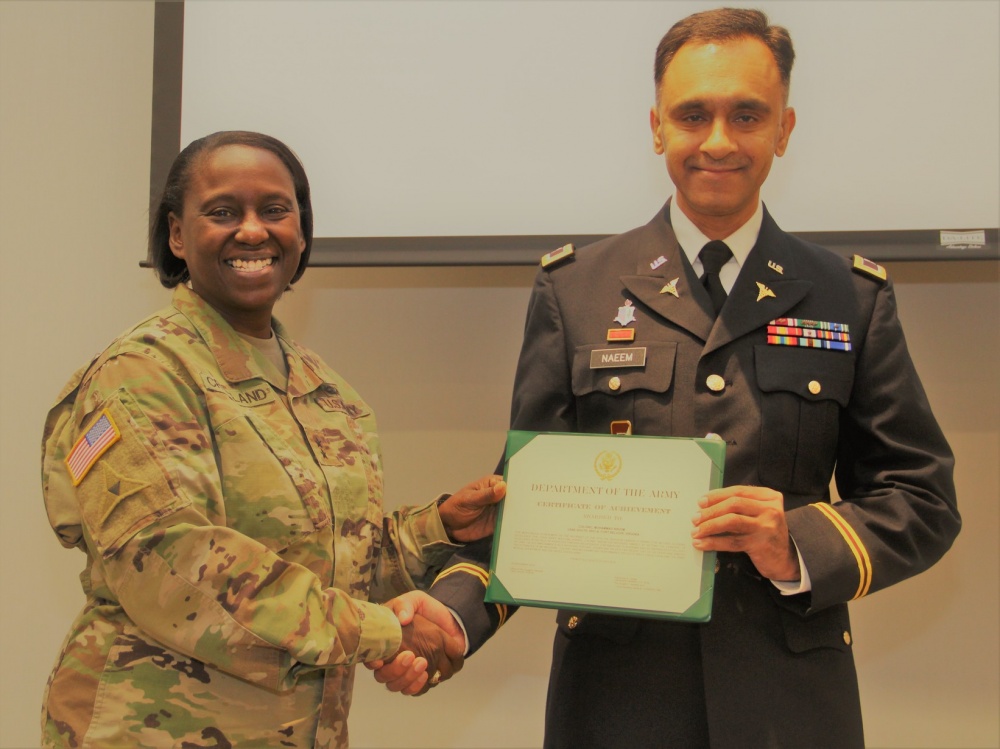 Col. (Dr.) Naeem, who currently serves as the Diagnostic Radiologist and Officer-in-Charge of the Radiology Strategic Operations and Emergency Response Team at Fort Belvoir Community Hospital, takes exceptional pride in being honored by the Army Surgeon General.

“Twelve years ago, I attended my first Joint Services GME Selection Board as a young and nascent Radiology Residency Program Director from Madigan Army Medical Center when the Mologne and Physician Recognition Award took place. Seeing those officers receiving the awards and accolades from the Surgeon General was awe-inspiring. I said to myself, ‘I want to be on that stage receiving this honor,’” Naeem recalled. “So, I was in an unbelievable state of ‘trance’ when I stood in the front and center with those 12 years flashing before my eyes.”

The Mologne Award for Military Academic Excellence, now in its 23rd year, is presented annually to one Active Duty and one Reserve Medical Corps colonel for being recognized as an Army physician who exhibits a balance between outstanding leadership in military medicine and leadership in academics on a national level.

This prestigious award is named after one of the first West Point graduates allowed to attend medical school. Maj. Gen. Mologne, the Army general whom this award honors, went on to complete 34 years of active military service. Mologne also completed a tour as the commanding general of Walter Reed Army Medical Center.

Army Maj. Gen. Telita Crosland, Deputy Surgeon General, Office of the Surgeon General, presented the award to Naeem among a select group of Army physicians who were also honored for their commitment to excellence in support of Army Medicine.

“On behalf of the Surgeon General, it was an honor to present Col. Naeem the prestigious Mologne Award. I’ve had the distinct pleasure of serving alongside him, and it comes as no surprise that he is this year’s recipient,” Crosland said. “Throughout his career, Col. Naeem has established himself as a well-respected and selfless leader in both academics and Army Medicine. He truly emulates the spirit of the Mologne Award.”

An American of Pakistani heritage, Naeem graduated from Pakistan’s most premiere King Edward Medical College to start his medical career. His family had been coming to the U.S. since the 1950s for advanced engineering education, and he followed suit to become the first doctor in his family.

After completing a year-long medical internship in New York, Naeem began his specialty medical career by entering a Diagnostic Radiology residency program at Penn State-Hershey Medical Center in Hershey, Pennsylvania. Upon completing his residency, he went on to complete two academic fellowships in abdominal and chest imaging at the University of Colorado Health Sciences Center in Denver.

For Naeem, however, serving as a military officer was always his ultimate goal. He feels he was “primed to the core” by his family to join the military, as serving in the armed forces in Pakistan is highly respected and admired.

“I always wanted to be a military officer, and that has been a God-given chance for me to fulfill my long-cherished dream, at the same time contributing to and paying back to the society in my adopted homeland, as a naturalized American,” Naeem said. “Becoming an active duty officer in the United States Army, one of the most prestigious organizations on the surface of the globe, has been an unmatched and unparalleled lifetime symbol of pride and honor for me.”

Among his duties as an Army officer, Naeem has served as the Radiology Residency Program Director at Madigan Army Medical Center at Joint Base Lewis-McChord, Washington, and as the Chief of Radiology and Europe Regional Radiology Consultant at Landstuhl Regional Medical Center in Germany. He has completed two overseas tours of duty in Germany and also a combat deployment to Afghanistan.

In addition to his duties as a full-time clinical radiologist, Naeem has advanced expertise in radiological and nuclear disaster preparedness and special interest in medical aspects of asymmetric warfare, international security environment, battlefield and counterterrorism imaging, and improvised explosive device related trauma. He has lectured at approximately 40 local, regional, national and international conferences and is a subject matter expert in radiology and in topics regarding chemical, biological, radiological, nuclear, and high-yield explosives. He holds the Surgeon General’s 9A proficiency designator and is a graduate of the U.S. Army’s Command & General Staff Officers’ Course.

Earning this distinction as the 2019 Maj. Gen. Lewis Aspey Mologne Award recipient is quite significant to Naeem who claimed this distinction has historically been awarded to trauma surgeons, critical care doctors, emergency physicians and pediatric surgeons, to name a few. According to Naeem, the efforts of these medical and surgical specialtiesClick to closeA branch of medicine or surgery that a doctor specializes in. are more visible than radiology and pathology surgeons who often operate in extremely arduous conditions. Most people may not know or fully understand the vital role played by these skilled physicians who have little or no patient contact.

“To the best of my knowledge, I am the first radiologist to have received this highest military academic honor,” Naeem said. “I sincerely hope that seeing the possibility of a radiologist winning this most prestigious award will motivate and encourage physicians in these support roles and specialties that they, too, can win these honors as long as they are steadfast and zealous in their pursuit.”